So I used to live in Hawaii while I was going to college on the North Shore of Oahu.  There is a little gem of a place there called Ted's Bakery where they make the most amazing Chocolate Haupia Cream Pie.  If you ever go, you must partake.  If you don't know what Haupia is, it's a Hawaiian coconut pudding.  Last night my friend Ali, over at Lemon Poppy Inc had a "Pie Party" where everyone made a pie and brought it to be photographed and tasted by everyone there.  It's for her up and coming cookbook called Humble Pie.  Keep a look out for it, it's going to be amazing.

So for the party I made a Chocolate Haupia Cream Pie and I must say... it came out REALLY good.  Here's the recipe that I used. 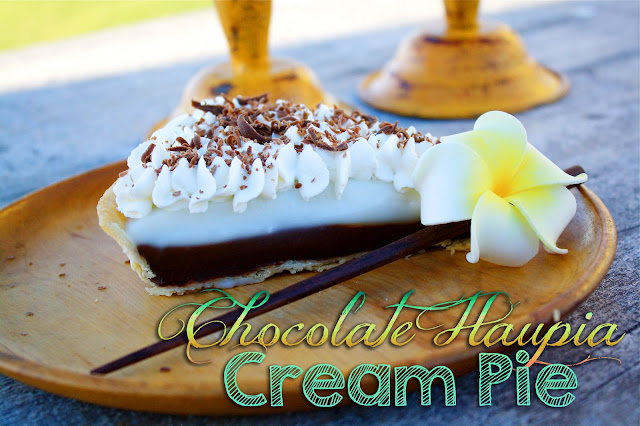 The Crust: Preheat your oven to 350 F.  Bake your pie crust for 15 minutes or until golden brown.  Allow it to cool.

The Filling: Combine the milk, coconut milk, 1 c sugar, and coconut extract in a saucepan.  In a separate bowl, combine the water and corn starch.  Bring the milk mixture to a boil, but be careful because it will boil over if you're not watching.  Reduce the heat to a simmer and whisk in the corn starch mixture.  Whisk constantly until thickened, about 3 minutes.

In a separate bowl, microwave the semi sweet chocolate chips for about a minute.  Give it a good stir to make it smooth.  Pour half of your coconut mixture into the chocolate bowl and whisk it together until smooth.  Pour this mixture into your pie shell.  Set it in the fridge for just a couple of minutes to help it cool and to keep the 2 layers from combining.  Pull the pie back out and pour the remainder of the coconut mixture on top of the chocolate layer.  Allow the pie to refrigerate for 5-8 hours.  The longer it's in there, the better it will set.

The Topping: When you're ready to serve, make your whipped cream by combining the whipping cream, 2 Tbsp of sugar, and vanilla in a chilled metal mixing bowl.  Use an electric mixer to whip it until soft peaks form.  Put your whipped cream into a pastry bag prepped with a large star tip (I used a Wilton 2D tip) and pipe little stars of whipped cream all over the top of the pie.  Then sprinkle with shaved chocolate. 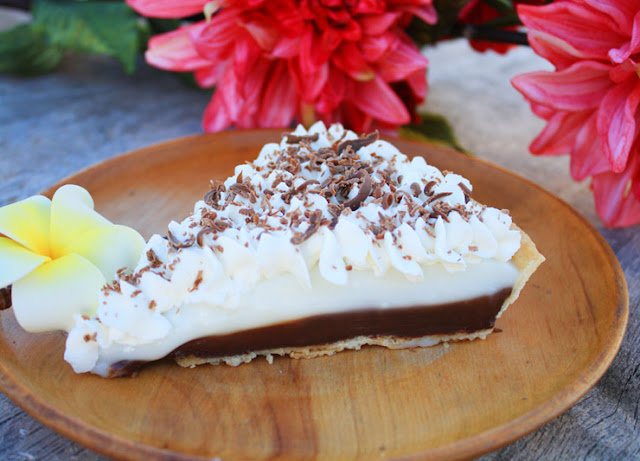